"Can't you make the same sounds on any synth?" is a question I get from a lot of people, mainly because most people I know barely know what a synthesizer is. I have already covered that in my 'Synthesis Chronicles' series (which, I know, wasn't the best explanation, but it got the point across), so now I am starting a more general series on one of the more interesting instruments on earth, the synthesizer.

This first installment will focus on the question first posed in this post, "can't you make the same sounds on any synth?" The short answer, as any synthesizer user knows, is no. Due to differences in circuitry (or in the case of digital synthesizers, coding and engine), no two different synthesizers can sound the same. Let's get into more detail, highlighting the main audio components: the oscillator, the filter, and the amplifier. Yup, this'll be a long post.

Before I begin, I would like to note that I am not taking into account various synthesizers that are different by design, but instead keeping it simple by referencing mostly simple subtractive synthesizers (which are by far the most common). FM, Additive, Hybrid, Wavetable, Sampling, and other types of synthesis (I know of about 20 total) will of course have their sonic differences, which are far too great to talk about in one post, and possibly even on one blog. Now, to the content:

Every oscillator is different. Sure, they all have the same general waveforms (saw, square, sine, triangle), but their exact sound is due to exactly how those waveforms are created. Let us look at a few examples of the standard saw wave from different synthesizers:

As you would well imagine, the saw wave we think of is best recreated by the Microkorg. We would expect this because at its core, it is a MIDI-controlled DSP budget synthesizer, and a straight saw wave is much easier to recreate than an analogue waveform (it has a slight curve due to the output circuitry's capacitors). However, Cakewalk's z3ta+ is also digital, however it uses waveshaping as its primary timbral creation technique, so it can more easily recreate capacitor charging, thus the more pronounced curvature. The Roland is also digital, and is still considered a Saw wave despite its odd look. Even looking at the analogue waveforms of the Moog and Oberheim, we can see that they are very un-saw-like, yet still are considered saw waves. Even the half-time saw is very saw-like, even in sound. How can this be? As you probably guessed, they are all very different designs, with different sounds. Now, sadly, I cannot possibly go into the exact makeup of each oscillator and how each part contributes to the sound, so I hope that just seeing these few examples helps you realise the true sonic span of different synthesizers.

Now, let us talk filters. There are a LOT of filter designs out there, each one is different sonically, technically, and, you guessed it, design-wise. In this case I will talk about analogue lowpass filters. I can't really touch digital filters, mainly because I have no real experience with how they work, but I do have experience with analogue filters, so I will talk about those. There are four main filter types that come to mind: RC, Sallen-Key, Transistor Ladder, and Diode Ladder.

Starting with the most basic, an RC filter is just that: a resistor and a capacitor. 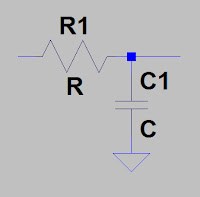 Really, all other filters use this at their core, but in different ways. The standard RC filter has no resonance as there is no feedback path, and is only single-pole. Very, very basic, and not usually used in audio. 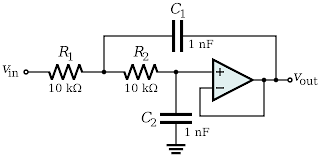 This type of filter is very popular, namely due to its fairly simple construction, and is 2-pole (aka 12dB/oct), which means you can make much more drastic changes to audio. You can also add resonance by placing an attenuator on the feedback loop. This is the kind of filter used in some Korg, Paia, Roland, and various modular filters, among others. Very, very common.

Transistor Ladder filters are the absolute best-sounding filters you can possibly make. Don't ask why I happen to have original design scans :) 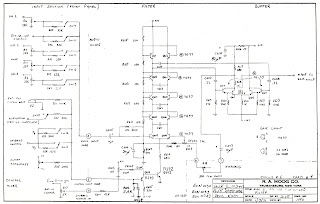 As you can see, transistor ladder filters are far more advanced (thanks Robert Moog!), and even still are very much like RC filters. Each transistor acts as a voltage-controlled variable resistor, and each capacitor is, well, a capacitor. After the first 'rung' of the ladder, each additional rung equals a 6dB/oct filter (the normal Moog ladder is 24dB/oct). Resonance is added much like on a Sallen-Key filter, using the output buffer and an attenuator to the filter input, thus creating a feedback loop. Due to how transistors behave, audio going through it sounds very lush and full. And, since the design hasn't really changed over the years, you can play any modern Moog and hear how it sounds. This kind of filter has been used in Moog (duh), Roland, Arp, and various modular filters, among others.

Lastly, we have the Diode Ladder filter, which is rather unique (another original design scan): 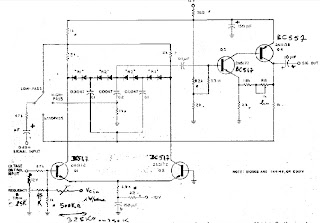 This filter was created by the rather inventive Nyle Steiner. It uses a 'ladder' of diodes and carefully controlled current to make diodes act like variable resistors. This design is also rather flexible in that it can be used for highpass and bandpass filters, as well as lowpass. It has a very unique sound which is very dependent on the kind of diodes you use. Resonance is interesting as well, as it has a fixed feedback path, with resonance amount controlled by varying the gain of the output buffer. This filter is used primarily on Steiner-Parker synthesizers, but it can also be seen in some modules.

Finally, we are at the amplifier. Really, the timbral aspects of it are very dependent on the components (or code/engine, if we're talking digital) used. However, most amplifiers are controlled in some way, be it voltage or 1's and 0's, and that added circuitry/code makes for additional timbral elements to be introduced. Instead of showing you amplifiers, I will simply tell you to look at various amplifier designs, because (just as with oscillators) there are millions of ways to make them, from analogue OTAs to digital attenuators.

I hope that this has shed some bit of light onto how synthesizers do vary and how they sound different, despite having similar parts and controls. Next up: "Why are modular synthesizers so expensive?"