MIDIMPLANT as a MIDI-CV Module

I know I can't be the first person to think of this, but I thought this would make for a neat module idea: use the MIDIMPLANT as a duophonic MIDI-CV converter for a modular synthesizer.

If you don't know, the MIDIMPLANT is a small MIDI-CV device that you can buy. The cool thing about it is that it has two CV outputs as well as two Gate outputs, thus allowing for duophony, among other combinations. And, since any form of polyphony is hard to achieve with any modular synth, it seems to me that this would be an incredible thing to do. Thus, I've planned it all out (this is the 4hp Euro version, but the 5U would be similar):

Pretty simple: MIDI I/O, learn button, and dual CV and Gate outputs. I'm thinking about adding LEDs to the Gate outputs as well. It is also easily powered by the positive bus (as it can handle power up to +15V), and as you can see, the size of MIDI jacks and minijacks just so happen to allow for a rather small MIDI module, which, I should restate, can be DUOPHONIC.

And yes, of course I'm going to say I used MIDIMPLANT on the panel. It's only fair.

If you were curious, this is what the MIDIMPLANT looks like, with pinout: 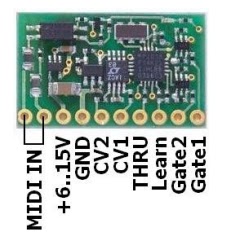 The device is designed for implanting into old analogue synthesizers so that they are more useful in the modern world. I see no reason why new modulars should be an exception as they are basically doing what older modulars did, just maybe with some newer design decisions and parts.

At the moment is is just an idea as I do not have the parts to build it, but I can imagine this would be useful.