So I know my last post was about oscilloscopes and I never like to post about the same thing twice, BUT I received an oscilloscope today, messed with it, and may as well blog about it since that's kinda what I do aside from Tweet and Post. I should put "compulsive tech/music/electronics blogger" on my resume...

So I decided to show my dad Gabotronics' line of oscilloscopes. Given its price and incredible functionality, he not only got me their Xminilab but also all its accessories: programming header, jumper leads, USB cable, and carrying case. Dare I say, it's one of the best oscilloscopes I've seen. 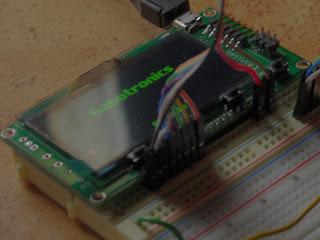 Before I go much further, I should point out that the USB cable is mainly for powering the unit, though it can be powered via +5V to one of its pins. It's not a USB-centric oscilloscope, however you can export data from the oscilloscope to your computer via USB. 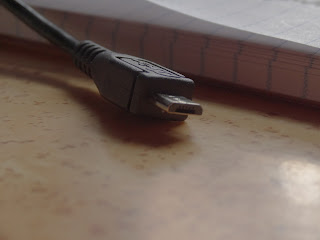 So when I got it into my studio, I slowly unpacked it and pretty much basked in the fact that I finally had a working oscilloscope. Oh, and had Deadmau5 blasting at a decent volume (did I mention I recently sold some random gold and bought some KRK monitors? I didn't? Well there ya go.). 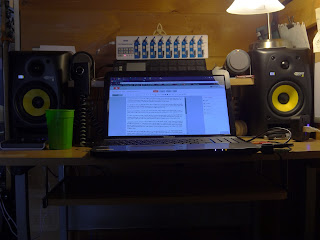 I opened the manual, and one of the first things I saw was the pinout. "Well," I said, "I may as well grab a breadboard to put this on." I then proceeded to use the jumpers to connect grounds to my PSU's ground and use them like permanent probes for the 2 analogue inputs, waveform generator output, and External input. 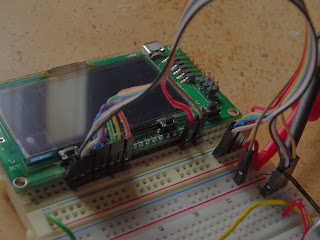 Without referencing the rest of the manual, I connected the first channel to the output of this simple oscillator circuit (which is indeed my simple op-amp based square wave oscillator with a 1Mohm pot for controlling frequency): 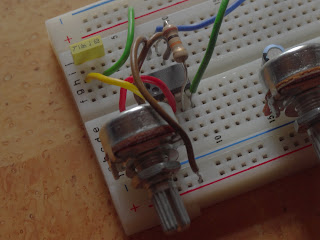 At the time I also had a couple filters after it, so I was messing with those as well. It has nearly all the functionality of more expensive units, including vast zoom capabilities, which is great for either reading idiosyncrasies of even high-frequency audio waveforms or watching LFO's operate (which is quite fun, if you've seen some of the LFO's I've created). This is the oscillator's output: 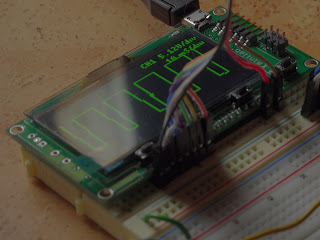 While playing with the various controls (which are laid out very much like an 80's button-job synthesizer), I noticed the manual stated there was an automatic setup feature. I had already set up the oscilloscope just using my mostly-basic knowledge of oscilloscopes, but because I was curious I tried it. Turn the 'scope on, patch the waveform generator to the channel input and hold K1 (the left-most tactile switch). The result was a super fast waveform scrolling by with no triggering. I reset it so I could actually see the waveform, and got rid of the second channel for clarity: 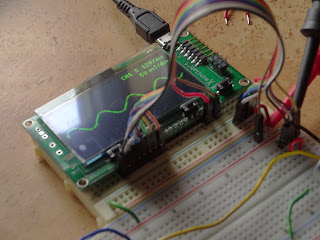 Nice screen, eh? And as you can probably tell, the screen is highly visible from almost any angle. Which is good, because I can't really take much of a top-down shot. Don't let the small screen scare you; it's very easy to read, and unless you're measuring the idiosyncrasies of noise, the relatively poor resolution is perfect.

Another good thing about this oscilloscope is how the controls are laid out. If you've ever used an 80's button-job synth, or just know how to push buttons in various sequences for a final output, then you will be familiar with using this oscilloscope. Would I prefer per-function knobs? Of course. But, Gabotronics was very smart in their menu layout, and everything is easy to access and figure out. They even have various diagrams of how menus work in the manual! 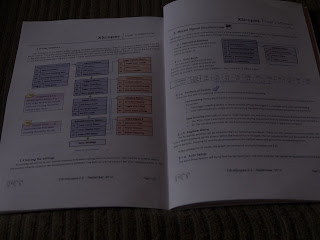 I've really only had a couple hours with this oscilloscope so far, but I can tell that it will be incredibly useful in making sure my designs work. Everything from voltage measurement, frequency counting, spectral analysis, outputting test waveforms, and of course being an oscilloscope, and I will probably use every single function multiple times a day.

I didn't go through everything it can do, mainly because Gabotronics laid that out better than I could:

So, for around $80 for the Xminilab, including all accessories, you can have all this amazing functionality in a rather small footprint (as you saw, I'm just using a small breadboard, but you could easily have it hanging off the side of a breadboard, or even make a little case for it).

In my opinion, it couldn't have been better. 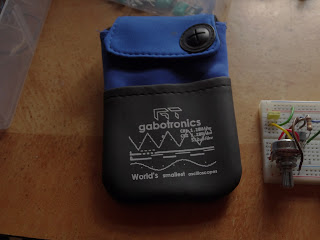 PS: my apologies, my last computer crashed and now I have a new one (also courtesy of my loving father; damn I owe him a lot), but I don't have Photoshop on it yet so the pictures aren't all pretty n stuff. They looked fine on my camera's screen...