One of the most important tools a synthesist (or synthesizer builder) can have is an oscilloscope. The only problem is that these are either costly or problematic - well, unless you do a bit o' interwebz searching.

If you don't know, a while back I got this Heathkit Oscilloscope from my dad, who got it from eBay. 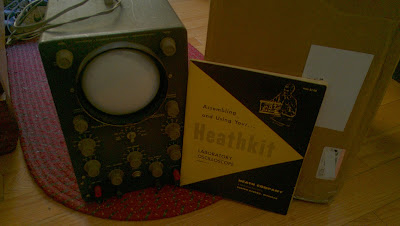 The seller said it worked, and it had an image showing it working. As it turns out, all it does is power on (aka not explode when you turn it on). No display, no waveforms. I've checked it over, measuring resistances, capacitances, and so forth, and the only issue is that one of the tubes doesn't light up. Normally, this isn't an issue, except that tube just so happens to be a rare Russian tube that hasn't been made for like 50 years and now, if you can find one, will run you at least $60, which is more than the whole unit cost.

So, I certainly can't fix it, and don't want to find someone to see if they can fix it because they probably cost a lot as well, and can probably get a whole oscilloscope for the price of that one tube which may or may not repair this oscilloscope. Thus, I've done some research and found two things that are incredibly useful in my search: eBay, and Gabotronics.

Let's start with Gabotronics. Among other stuff, they make the world's smallest yet most powerful oscilloscopes. They have various models, but the two I like are the XMEGA Xprotolab and the XMEGA Xminilab. They are cheap ($60 and $80, respectfully), have way more functionality than I'll ever use, but are small and digital. Digital isn't so much a problem except that it means pixels, which means slightly less precise waveforms. Small really just means you'll be using the zoom functions a fair bit.

eBay, of course, is a good place to find cheap stuff. This is true also for oscilloscopes. I had to do a fair bit of filtering, but eventually found a bunch of oscilloscopes for less than $100. By this point you have to really look at the descriptions. Since I've had bad luck with the old Heathkit, I'm pretty much staying away from anything that remotely says it might not work. After that, I just add everything to my watch list and hope they stay affordable!

PC oscilloscope software obviously exists; in fact, I use Visual Analyser 2011 for looking at synth waveforms in my studio. My thing with software oscilloscopes is that you either need an interface or some kind of current and voltage limiting. Most computers don't like raw analogue synth outputs. There are many ways around this, sure, but then you have the problem where my computer is in a totally different room and I really can't move it much. Then, of course, name a computer that doesn't have noisy audio that's actually affordable. I pretty much stay away from using software 'scopes, as you can imagine.

Now, I just need to wait for an affordable oscilloscope to come around (or buy a Gabotronics one) and figure out what to do with my Heathkit. Maybe put it back on eBay. Or, maybe just sell various tubes from it. Or do nothing. I don't really know. I mean, it looks cool, but I'm not a huge fan of giant nonfunctional decor from the 50's.

All while trying to start a company. Where's this supposed "suitcase with $1M in it" I hear about sometimes? Could really use that.