SO I thought I'd tell you more about the three main timbral elements of my modular: the Oscillator, Shaper II (complex waveshaper), and Filter.

The oscillator is a simple device at its premise, but is much more than that once you add the waveshapers, and even moreso if you use it with a mixer. I based my oscillator off of the base waveforms you could get out of older Buchlas. In this image you see the current design schematic with a slightly older design faceplate. In the text I'll tell you what's going on and what I want. CV elements are not included. 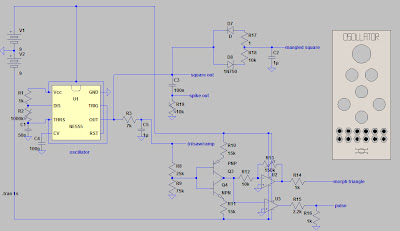 So still I'm using a square-core oscillator. For me it just works better than a saw-core mainly because I know how a 555 works and how to use it. Saw-core is just really confusing for me and once I figure it out I can never get the same range as I can with a 555. Anyway, so from that square output you go into the first two shapers: one a highpass filter, the other a mangler. The highpass makes a spike wave, but is adjustable so you can get wider spikes. The mangler produces everything from half-wave saw waves to combination saw and square waves, and even can do filtered clipping. Swapping the cap (or using a switch to swap caps) produces even stranger effects.

On the lower part, you start with a little low pass filter just to get a saw wave. That goes into a rather interesting variation of the Lockhart wave folder. Using the volume crossfader and gain control, you can get everything from distortion to quadruple-folded waves from the "morph" output, and you get square and pulse waves from the pulse output. You can add a bit of upper variation to the pulse by changing the 2.2k to a 1k, and you can control the volume of the pulse with the shunted 1k resistor.

I know, I said earlier I would base this oscillator off of Make Noise's DPO, at at some point I might add some DPO functionality. This is just current progress. I also want the saw wave to be reversible and to crossfade them together to make a triangle, which may end up being a problem. Guess we'll find out. Originally I had a great idea that used a variable slope triangle wave, but it didn't operate slow enough!

The Filter is rather complex tonally, but in reality it's quite simple. Note that in this case I have not included the CV elements. The basic premise of this filter will remain, but I have a new idea for the individual filter components to make them voltage controlled.

This filter is pretty simple at its core: just two filters, a lowpass and a highpass. Each filter is completely non-resonant until you flip a switch and activate the gain structure for each OpAmp. Increasing the gain increases resonance (and clipping at higher levels). Each filter also has feedback. This was based off of older Moog's external audio input: you could route the output signal to the input, overdriving the filter, adding depth and some distortion to the final sound. That is all handled here with an attenuator.

Then you have the HP/BP switch. That switches between using the final highpass filter for highpass or bandpass purposes. Using the original audio signal, it acts as a highpass. You then have both highpass and lowpass outputs. Switching from the audio input to the LPF output, the HPF is then used for bandpass purposes. You'd use both filters to adjust the width and response of the bandpass filter.

This is a good time to talk about the LP>HP output and crossfader. In any case, 0% will be lowpass and 100% will be highpass or bandpass, and of course any point in between. In the LP+HP setup, this is useful for creating a band reject filter at 50%. In the LP+BP setup, you get a similar setup, but you get a very interesting response output at 50%.

Shaper II is rather interesting because not only can it create interesting waveforms, it's the same thing used in the Oscillator! 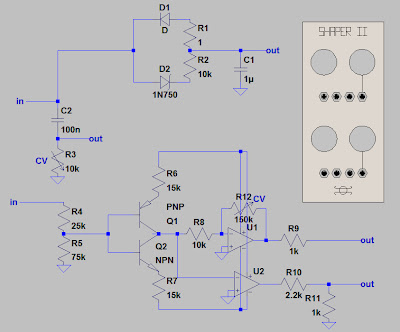 Though the actual circuit is exactly like what's in the Oscillator, given different shapes it can produce drastically different tones using the same principles. It also has the lower and upper sections separate, but if need be you can use a splitter, mixer, multiple, etc. to get the same signal to each section.

So that's how those work. I'll work on the voltage control portion of things. Won't be surprised if I just use vactrols for everything, really ^_^