So remember way back when I had this idea for a really neat drone synthesizer? Well I've made a few useful additions to it.

The first change is, for each oscillator, I added an attenuator and on/off switch. This is useful for mixing your oscillators together, and makes it more like what it's based on, the Sleepdrone 3.

The second change is I changed the amplifiers to be Op-Amp based. Using LM386's is fun, sure, but they take up more room due to more parts and they cost more. The distortion is still using a 386, though. I could get around that as well, but I have no real reason to.

The third change is a little stranger, though. If you forgot, the Triple Fiver is named such because it used three LM555's as oscillators (ok, really a 555 and 556, but whatever). I decided, using my now-expanded knowledge of electronics, to use Op-Amp-based oscillators, like this: 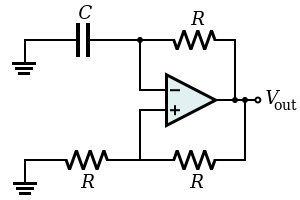 I did this for several reasons:
1) the pulse width with stay around 50%, whereas 555's vary greatly with frequency
2) the voltage output will be far less (around 6Vp-p), which is perfect/safe for using it with outbound gear like modulars or mixers
3) the 0-9V signal of a 555 was getting oddly offset by the filter's Op-Amp design
4) still a wide frequency range (2Hz to ~10kHz, easily adjustable with a cap swap)
5) FAR less parts

This also means I can use half the board space, which will be useful because I could then use the other half for other projects! The actual synth will still be large, though, because it has a lot of controls n such. Just like all good synths should!

I will still call it the Triple Fiver, just because I can't think of anything much better, and for historical accuracy :) One neat thing, though: the filter, as you may recall, is a parallel lowpass and highpass. I never really thought of it until today, but it's capable of creating a phaser-like effect if you separate the cutoff frequencies and move each cutoff knob an equal amount up and down. I simulated this with my MicroKORG today. Very neat effect, especially for a drone synth.

I think I will build this new version as much as I can (c'mon Futurlec...) tomorrow and test it out. The individual parts work alone, but how will they work in series?