Well, let's not get ahead of ourselves. First off, happy new year! I feel this is a good post to kick off the new year with. Also, did you see that I changed the blog page a bit? I just did a few small edits, nothing huge. Let's hold a contest: if you can name everything I changed (5 things), you'll get... I dunno. A Heart Container? haha

So, as I said I would do before the ACIII post, I built a saw-core oscillator. I didn't use the little idea I had posted, though I was going to. Then I came up with something else: 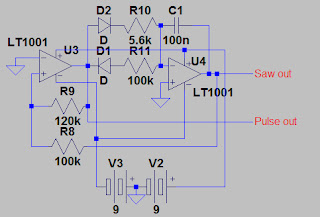 It's a little messy, but what really matters is the output. It outputs a near-perfect saw wave (ok, really a ramp, but the sound is similar), as well as a pulse output:

But, here's where the 'n Stuff' part of the title comes in: I have a new module!!

As you probably know, I have a ton of fun playing with unpowered OpAmps. Maybe too much. But, today I used that, an NPN, and a few resistors to come up with what I'm calling an Arbitrary Sample and Hold.

Yes, yet another 555. That's the clock signal. The input is the random line going up, and you can also insert your own clock signal (can be any waveform, which creates neat effects). The module has a control for clock speed (which I might make voltage-controlled), a jack for inserting your own clock, and the bottom jack is actually the internal clock's output, should you need a synchronised output and/or square wave. The two middle jacks are input and output.

Now, you probably want to know what it does. Well, here ya go:

This is with the saw oscillator as an input and the 555 clock. The original input signal passes when the clock signal is low, at least in the positive voltage area. In the negative voltage area, it's the opposite effect. This is because during those times when the original signal passes, there is no secondary voltage to compare anything to. When the clock signal is high, something magical happens and the circuit sums the two voltages together. I seriously don't know enough about electronics to understand why this happens, but it's fancy.

As you can probably tell, this isn't really a summer, sample and hold, or even a gater. Or maybe it's a gated summer, I don't know. But, it is fancy, and so it's a new module now. I can see this being nifty for both audio and CV signals.

I just took another look, and if you don't have an input, it acts as a ramp oscillator:

However, I'm pretty sure those voltages are, well, probably realistic, but scary. An OpAmp can amplify 1000x, you know. ﻿

So there's this dubstep producer, Bolshevik, maybe you've heard of him, who produces really interesting stuff. It's obviously dubsteppy, but has some major hip-hop and techno vibe. Only problem is he has problems with orchestration and composition, but he's getting better. Here's his latest track: https://soundcloud.com/#bolshevikofficial/execution

Hey, you know I love supporting other artists. In other news, I totally neglected to say what I got for Christmas! It's mostly electronics-related, but proves that quantity can easily be pwned by quality:
1: Korg MS-20 T-shirt with Japanese text (which I totally want to frame)
2: ACIII
3: Elenco Hobbyist's kit, which has so much awesome stuff I can't list it all. Let's just say I could give my dad his tools back and got a lot more :)
4: (I actually got this later, but it's ok) small electronics utility table (handmade)
5: Elenco Adjustable Power Supply Kit, which I am currently building because I actually just got it today.

What can I say, Christmas can last a few days around here! Big thanks to my dad for, well, supporting my hobby :)

Oh, and I'm getting a TON of awesome components soon. My dad went on Mouser (my preferred dealer) and got me 5 4017's and 10 red LED's, so I can make (and hopefully not screw up) my sequencer, and adjust it as need be. Then today, I joined Texas Instrument's my.TI, which allows you to get free samples of their ICs (not even a shipping fee!). I got 3 quad opamps, 3 quad comparators, and 3 5-transistor arrays (two of those and you can build a Moog Ladder Filter, y'know). I could have gotten more but didn't want to intrude on my luck, and also didn't know what else to get. TI has a HUGE selection.

Finally, I've uploaded a few new things to Soundcloud if you haven't been watching. Nothing incredible, but neat stuff: https://soundcloud.com/#yoa01.