Seeing as how I have a fair amount of time on my hands, I've decided to redesign my modules. Yes, almost all of them. 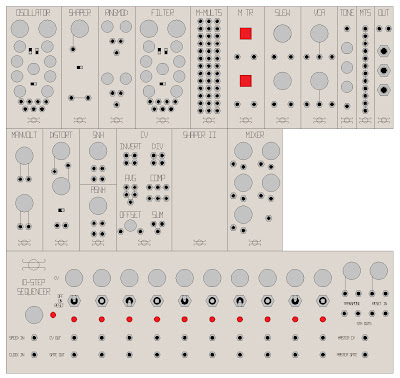 List of mechanical changes:
-made knobs smaller, two sizes
-met Eurorack size standards
-made all modules either 4, 8, or 12hp (except sequencer, still 84hp, which is the typical width for Euro modules)
-made switches smaller (except on sequencer)
-made all jacks 1/8" (except on Out module)

New modules:
Filter: this is a very complex VCMMF (voltage-controlled multi-mode filter). It uses both lowpass and highpass 12dB filters and special audio routing to produce interesting timbres. Each filter has switchable resonance (yes, these can be totally non-resonant) and feedback amount, as well as attenuated voltage control. There is also a master CV input (control both filters with same CV) and single audio input. Outputs include lowpass, switchable highpass/bandpass, and a crossfader between the LP and HP/BP outputs. BP can also be BR, depending on how the filters are interacting.
M-Mults: 6 sets of 6 mults, and a set of 3 mults. If you need more... eek.
Tone: passive lowpass into a highpass, with a crossfaded diode clipper. Merely gives you some tonal control.
MTS: 3 sets of 4 mults. In case you do need more.
Out: a simplified version of Pittsburgh Modular's Outs module, has left and right inputs (if nothing is in the right input, it uses left signal), TRS 1/4" and two TS 1/4" outputs. Bidirectional, if you want.
Shaper II: this will be a Buchla-based complex waveshaper, assuming I don't build it into the redesigned Oscillator. Speaking of which...

Redesigned modules:
Oscillator: I'm completely redesigning my oscillator. I don't like the old one. What you see here is probably not what it will be, but it will be inspired by Make Noise's DPO.
Ringmod: All I did here was add input attenuators.
VCA: given the new space using smaller parts, I put two VCAs in one 8hp module :) Same thing electrically.
SNH/ASNH: I simply combined my Sample and Hold and Arbitrary Sample and Hold modules in one.
CV: Yes, revision 4 of my CV Tools module, but I think this one is good. 2 inverters, 1/4-1/2-3/4 voltage divider, 4-in averager, two comparators, REAL offset (created using a slew limiter into a comparator referencing 8V), and a 2-in summer. I think it has enough stuff in it now :)
Mixer: didn't add much here, just made each atteunator have a separate output so you can use them just as attenuators. Yes, I based this idea off of Pittsburgh Modular's mixer.
Sequencer: Didn't change much here, just added a summer circuit with one input being the master CV out. Input a CV, and the pitch will be transposed. For example, if the sequencer is outputting 2V and you add a 3V input, it will output 5V.

Modules to come:
LFO: Simply a low frequency oscillator. Probably will have square, sine, triangle, switchable saw/ramp (or maybe variable waveform saw, depending on the design I go for. Maybe both!), and maybe built-in S&H using either another waveform or noise. Still working on it, but very close.
ADSR: What synth is complete without an envelope generator? I'm thinking of using a modified Roland 100m ADSR (module A-140, no relation to Doepfer), modified in such a way of course that it's totally my own. Kinda hard to do, but I think I know how to keep the snappiness of it while also letting it have up to 20s of time between sections. Should be fun...
Logic: I was thinking that a few logic gates would be useful, but definitely a last priority.
FM processor: interesting module which will allow you to input any two signals and it will use one input to modulate the other. Not really sure how that will work, though.
Formant-y Filter: this will be 4 individually tunable high resonance bandpass filters with an attenuated master CV control and master manual control. When swept, it will sound either like multiple wah pedals or kind of like a formant filter. Either way it'll be interesting.
TipTop Audio uZeus: Yes, I'll be using a premade PSU once I get stuff built. I like the uZeus' flexibility (not speaking just literally here), and given that I can probably make ribbon cables for bus>board connections, I'd say I'm pretty much set with the uZeus.

So yeah, I'm having all sorts of fun over here. And, I know that each module works because I test them before posting about them. Should be interesting to actually put them all together and play it!