There are those who say that bitcrushers are digital-only effects. These people are fools, I say.

Though it is true that bits are digital, and removing bits is also digital, you can get the exact same effect using... *drumroll* Sample and Hold!! Yes folks, the standard sample and hold function on pretty much any good analogue synth (Arp 2600, Moog Modular, ANY modular, etc.) can be used as an analogue bitcrusher-like effect, given you drive the clock signal into the audio range. Here's how:

First, grab yourself a voltage controlled switch and a capacitor. If you don't have a VCS, don't worry: transistors can be switches, too :) 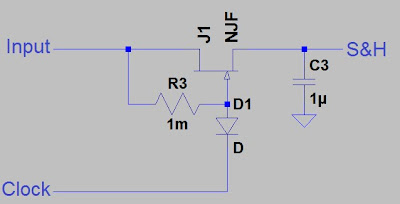 Pretty simple, you've got an input, a FET, a clock signal, and a capacitor. The 1M resistor and diode are there purely for stability, and not actually required (in fact, leave them out for some interesting effects). How it works is pretty simple, too:

Due to this, however, if you have a 50% duty cycle clock signal, only half of the time will your signal be held (again, interesting effect). Thus, you need a clock signal with a duty cycle of 10% or less to get a sample and hold effect and keep it this simple. This can be done with, of course, the 555.

So far, we just have a standard Sample and Hold circuit. Now, it's time to bitcrush!!

There are three main parts to a bitcrusher: downsampling, jitter, and dither. Downsampling can be done simply by changing the frequency of your clock signal. To get bitcrushing sounds, you'll need to operate the clock in the audio range. This will create a waveform very much like a normal sample and hold function.

Jitter is actually very simple, and if you listen to modern dubstep (or brostep) you have heard this effect in talking growl basses. These sounds are formed using a bitcrusher, with the samplerate jittered with the filter's LFO; that is, the samplerate (frequency of the clock signal) is modulated by an LFO. Simple enough.

And there you have it, a fully functional analogue bitcrusher. Pfft, who needs digital bitcrushing? LOL