So, as you all kinda know I've been enjoying the idea of a 555-based oscillator a bit too much. So today, I built the perfect multi-waveform 555 oscillator. As if it wasn't enough fun...

So, we'll just start with the heavy stuff, here's the basic circuit: 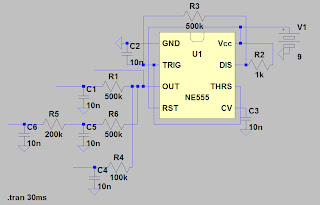 It's a basic 555 astable multivibrator (to be precise) with the top 500k resistor controlling frequency. On the output, you'll see 4 outputs and essentially 4 low pass filters (two on one output). The upper is a square wave, as expected, the next down is triangle, the next is sine, and the last is saw. Well, what I'm calling saw. Here:

As you'll see, green is square, blue is triangle, red is sine, and teal is saw. You'll also note that none of the waves are perfect (except maybe the square). That is because, due to the nature of RC filters, the capacitor is affecting the wave. You'll note the triangle wave, for instance, actually has slightly exponential curves, not straight lines.

So, about the saw wave: due to the capacitor's effect, an exponential rise and fall is created, with a peak at both ends. This is somewhat similar to how a saw wave behaves, except that saws are straight rises with linear falls. Unless... we look back into synthesizer history...

Take a look at any old Oberheim saw wave. Actually, I have one here:

You'll note that the rise and fall are slightly exponential, with the rise being inverted. This can be done with my saw; just adjust the pulse width (getting to that) and use a voltage switched inverter, and you'll get quite close.

Now, we still have three issues with this oscillator: how do you make it voltage controlled, how do you change the pulse width, and how do you make all outputs the same volume? I've figured this out, too.

First, voltage control. Nowadays, we have these fancy things called vactrols. This makes voltage control cheap and easy: the voltage is applied to an LED, whose amount of light is determined by the voltage. This shines onto a photoresistor, which changes resistance according to the amount of light hitting it. More voltage=more light=more resistance. Doepfer actually uses vactrols in some of their modules. Replace the resistors/potentiometers with the resistor end of a vactrol, and you've got voltage control. 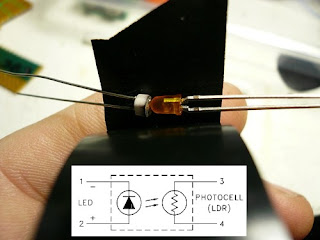 How to change pulse width: this is easy, but has a problem. To change it, simply use a potentiometer for the 1k resistor between pins 8 and 7. This, being a resistor, can also be voltage controlled. The downside? It also affects pitch slightly. However, that can be easily fixed by changing the normal frequency control. This also means that all the waveforms can have pulse widths, which can create some very interesting sounds.

Finally, amplitude. All that filtering causes amplitude problems, especially for the triangle and sine waves. The fix? Use an amplifier! You can amplify the signals with either a buffer amplifier using an opamp, or use an actual audio amplifier, like a 386. I'd use the opamp, though, because even though it needs a unique power source (which is easy to build), it won't clip as easily as a 386 will.

So basically, this is the simplest analogue multi-wave oscillator you can build, as far as I know. Sure beats something like the Aries 317 or (heaven forbid you build this) the MiniMoog oscillator. Except, well, those don't have the same problems this oscillator does, but whatever.

Hey, next maybe I'll show you how I built my multi-type analogue filter! Actually... *starts writing next post*