Learning how to make a filter was like my fish. I say that because, in just 5 hours, I've completed the plan for the Triple Fiver. Yes I'm still calling it that. 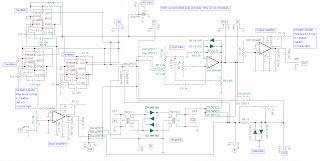 It's a smaller image, but if you zoom and pan a bit you can see everything.

I did add a few things: two more oscillators, an input amplifier, a power jack, and two more jacks (I/O for the input amp). So, yeah, I pretty much went all out, at least as far as I'm willing to go for now.

1) The diode clipper on the bottom right is acting as a stand-in distortion unit. I've found that actual distortion units suck to build, so for now it's this. The pot is supposed to be a clean mix, but it seems to bypass that entirely. Not sure how to fix that... except, I do know how to build a crossfader. Maybe in another version or something I'll build an actual unit. I mean, I have distortion pedals galore, so if I really need it it's there.

2) The I/O jacks may or may not need diodes to direct electrical flow. I'll have to test it.

3) If I wanted, this could easily be adapted to be a small 8-module modular (3 oscillators, 1 filter, 2 amps, ringmod, and distortion). Adding CV and other stuff would make it geared more towards that, though in a way it is modular, with all the I/O and stuff.

4) I added a few switches just for easier/more patching. You'll also note all of them are on-off. This can allow for a lot of stuff to go on, such as the oscillators going to both the ringmod and filter. Hm... patch idea!!

Actually, that would probably just create a muddy vocoder-like Dalek sound. Heh, I'm cool with that.