What this is really about is how my synthesizer I'm building is finally starting to move on. If you are friends with me on Facebook (or subscribed to me), you'll know that I've been having problems trying to build a filter. I've tried everything from Sallen-Key's to SWP's filter, but nothing has worked. They were waveshapers or simply non-working. Now, though, I'm happy.

I went to http://www.doepfer.de/a1011_tec.htm, where Doepfer talks about how they designed their Vactrol and MS20 filters. I've been here before, but didn't understand a lot of it. Now that I've been studying electronics for a while, I know what they are talking about. I built their MS20 clone filter (without CV, of course) and, with a couple minor changes, it works! 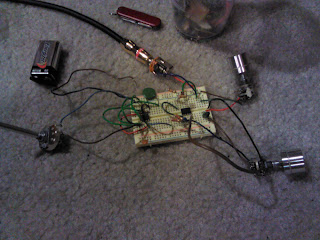 Ok, not the best picture, I realise. Basically, on the left there's a 555-based oscillator. On the right is the filter, complete with cutoff and resonance controls.

I would upload sound examples, but by this point, I'd rather wait until the whole thing is complete. It's pretty close to completion now.

Speaking of which, not much is left. I only need to build the effects (ringmod and distortion) and the amplifier, test it all, then solder it all together and test it again. Then it's just the modularity and aesthetic aspects.

By modularity, you may recall I have jacks in and out of this thing: outputs from all parts, inputs into everything but the oscillator, not to mention power supplies (I decided to also put a power jack because I don't want to be changing this thing's batteries all the time).

As for aesthetics, I decided that I want it in a maple box with rounded corners, and give it Moog-style knobs (black ones with a white line and mother-of-pearl-like inserts).

Though, I don't know yet if I want there to be a separate amplified audio input. I could always use an external preamp, sure, but if there's one built in... agh, so many possibilities! I also am thinking of adding a 556, so that I have three oscillators, not just one. Chords and dissonance, woo!

Anyway, just an update for ya. Next I'll work on how to make a distortion. This should be fun...