So I've started breadboarding my little synthesizer. So far I have a basic square wave going (I can't build the rest of the circuit yet) into a modified Sallen-Key filter. Problem is, well, that filter isn't too happy.

That is a video showing what it does so far. As I say, it's a fancy pulse-width modulatable, frequency tunable square wave oscillator. Except, well...

The output of the oscillator itself (running through a Marshall MG15, no effects, EQ set 10,0,0, mixed with some noise from a mic which was on the same channel) looks like this:

﻿
Obviously, that's effects- and noise-laden, so to show it by itself...

So whatever is going on, it's not filtering, that's for sure.

Now, I should note here that this has not been properly tested. The first image was when I first made the oscillator work, and reached for the nearest amp. The second image I took just now, which is directly from the rebuilt oscillator, into a mixer with everything turned down, and into Audacity. The third was using the Marshall setup, but with the filter.

Yes, I said rebuilt. When I initially tried taking that image, there was no sound from the oscillator. It was just noise (of course I thought I somehow blew another 555). I cleared my breadboard and rebuilt just the oscillator :)

To be honest, I won't rebuild that bloody filter, at least not now. I don't have the proper parts, and the ones I do have have problems fitting onto the board because I got a small board.

Here is what I think is going on: the signal going to the filter isn't a square wave, but noise. That goes into the filter, which has improper parts and is possibly built wrong, thus giving a strange sound and unpredictable results.

If I have the time tomorrow, I will rebuild it all, make sure each part works properly, then blog (and maybe vlog) again. I really want this to work, man!!! 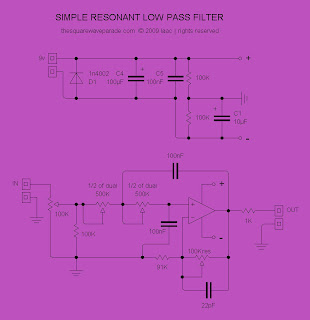