So today I did something possibly stupid: I emailed Mr. Tom Oberheim regarding his incredible polyphonic triggering system used in older Two Voice and Four Voice models. Moreso, I asked him if he can help me out with adapting this idea to the KereMAX.

If you didn't know, what I want is a simple two-switch system (one of the few parts of this instrument that is not patchable) that controls how the oscillators are triggered. Here's how I want it to work: 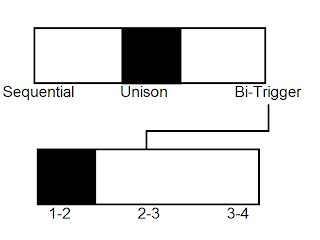 If that makes no sense, let me explain:

The second switch determines which oscillators are triggered. This may be pointless since the original Oberheim used SEMs, which could have totally different timbres. In essence, what this would do on the KereMAX is create duophony, using two oscillators per voice (think normal 2-oscillator synth... or ARP 2600). How does this work sequentially?

This will allow for the planned max of 4 voice polyphony, and easy duophony and monophony. Bear in mind you can turn off (really mute) each oscillator, so in Unison you can have just two oscillators on and not worry about differing waveforms or anything, like a standard two-voice monosynth.

So, what does this have to do with the Oberheim stuff? Well, the Two-voice had a 2-position sequential or unison mode, with the sequentials starting either on the left or right voice. The 4 voice had a unison on-off, and a 1-3, 2-2, or 3-1 triggering system. That means that for 1-3 mode, one key would trigger just one SEM, the next trigger 3 SEMs. Same applies to other modes. Now you get it, eh?

I asked Mr. Oberheim himself because according to forums he tends to read and reply to emails, and why not ask the creator himself? I do (of course) have full schematics for both the Two- and Four-voice instruments, but separating the polyphony parts and then putting them together would be a nightmare... that I would probably thoroughly enjoy.