As the title states, this is just a general update kinda thing, so if you're looking for something interesting, you may as well go to the first page of the Internet.

Firstly and certainly least important, the Monster Modular is completed! And by that, no, it does not mean I randomly found a place to place that $70K+ modular, bought it, and built it. What it does mean is that I have completed the layout of the MM:

It's kinda complex, I'm not going to go through it all, but basically it's a bunch of oscillators on the top left, Manglers and LFO stuff below that, Sequencers in red, CV stuff in Maroon, Filters in Yellow, etc until the far right stuff, which is all mastering and outputs. And yes, I do mean actual mastering: mixer, EQ, compressor, meters, etc. Pretty neat.

Secondarily, still with modulars, that Doepfer system has a new design, and it's something that's cheaper and, if I was thinking about it right, would have saved me a few hours of time. See, what I did know is that Doepfer had 'preset' setups, but I knew they did not have MIDI nor an external instrument input. But, last night I was thinking about it with a friend, and decided I can get their 1700 euro standard system with a 100 euro MIDI-CV converter, then just input any external audio to a mixer input and crank it up. Why I didn't think of that earlier, I don't know. But yeah, suddenly it's like 1800 euros instead of 2000, and still pretty fun and useful. And I can use Live direct to it via USB! Oh, and has a built-in mini-sequencer. 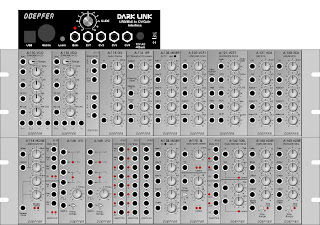 Random interjection; I did look into Paia for cheap modular action, but it sounds weak by itself, their main system is rather bland, and additional modules are kinda meh. Sorry Paia.

More importantly than just dreams are upcoming public tracks! I say public because there's more stuff to come (see below). So far in the works is a remix of Elmakay's "When I Look At You." So far it's not so awesome, but I hope it will be. Lots of re-sequencing. Also, I've got a couple house tracks which I'm not sure if they will be public or not. Lastly, there's a... thing, really. The file is Hard Aura, and it kinda is just that. Sounds awesome, though.

Promo tracks! Yes, these are the non-public tracks. I call them that because, when I think they are good, I will submit them to various producers/pseudo labels, like UKF, sublvl, and Monstercat. A little adventurous, yes, but if even one of them advertises any of my tracks, instant mass publicity, which means people will know me, which, well, if I can keep it up with tracks that people like, things could... 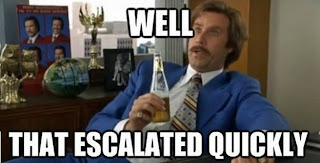 And finally, New YouTube stuff! Monday will be the first of a new channel setup. It will be a video explaining what it will be all about, but after that I'll have a weekly show on synthesis. I've yet to decide if it'll be a series kinda thing, like the Synthesis Chronicles, or if it'll just be random stuff. There will be other stuff, too, but all about music -- as I originally planned the channel to be for.