Yes, Doepfer, also known as the primary German makers of modular synthesizer cases and cheap modules. What do I have to do with them? Well, last night, as you may have noticed on my FB page, I went on Doepfer's website and built a small modular system. It's a total of 6U (2x3U) in a cheap wooden case. And here it is: 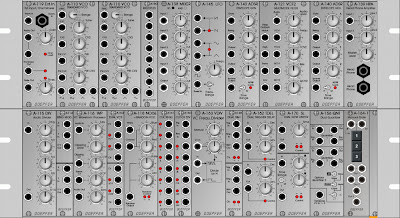 Now, what is this? Well, it's a basic 2-oscillator synth with a LOT of possibility. Some of it is not as useful, but... well, let's just run through it, left to right, top to bottom:

We first have an input. This is for processing any signal. It can also take that signal and 'export' gate and envelope CVs. Then you have two oscillators. You then see that thin module, which basically takes a signal in one input and spreads it across all the others. Then a 4-channel mixer for, well, mixing signals. Then LFO, ADSR, then a filter which is special because it has 4 12dB filters in one. Then another ADSR and what I'm using as a VCA, a headphone amp. It (I think, still not entirely sure) mixes two signals into one and outputs to two 1/4" outputs. (It may also be stereo, which would be even cooler)

Now, the bottom section. This is where all the real mangling and modulations are. The audio divider is basically a 5 octave subsynth, from the original to -4 octaves, mixable. Then you have two ringmods, then a waveshaper, which can either smooth or mangle waveforms. Then you have two switches, which using CVs can switch between the two inputs to the output. Next is a noise module, which produces noise, which also happens to be useful for creating random CVs. You then have a simple sequencer, neighbouring a clock divider which can split times fractionally, from 1/2 to 1/64.

Almost done :) That paragraph was getting long. So after that we have two trigger delays, which very simply delays when a trigger CV occurs. You then have two slew limiters, more commonly known as portamento. Then there are two quantizers (many of these modules are dual), which aligns signals according to a clock. It can do other neat stuffs that I don't know how they work yet, too. Finally, there's a manual gater (with a blank panel after that) which will allow me to trigger things manually instead of with a sequencer.

Now, this is all well and good, but there is other stuff I would want. Two mixers would be nice. Two multiples modules would probably be useful, and Doepfer also has a 6/12/18/24dB low pass filter, which would be cool for neat slopes in filter range and dynamics, and would allow other interesting filtering. But, I don't have that kind of room with only 6U. There is a 9U case as well, but if you get right down to it they also have a 6 foot tall, 38" wide case, and I also have that giant custom modular that costs like $56 grand I want to build.

So, why this, then? Well, for what it is, it is super nice, and I can make changes since I can't exactly afford the $2000 it would take to get the modules, the case, and cables. But, you know, when I can afford it, and if I don't have anything else I can spend it on, this would be a good investment (well, if you're me and far too much into synthesis to back out and also think that this is a better buy than saving for something more useful, like, say, a house. Yeah... maybe later).

Priorities are totally in line. Hey, a man can dream, can he not? At least I'm not looking to buy this just to have it sit around and look awesome. I even know what most of it does! haha