So, I was woodcutting today when these two guys came up to me and said:

We went on to talk about English music and what not. I've so far found three fans of Pink Floyd in RS other than myself. Woot.

Now, WHY I was woodcutting:

If you don't already know, I are mage. I am a huge magic user in RS: I even have multiple robes and runes to do magic with! 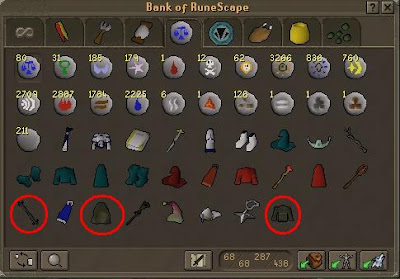 Well, I am trying to get full Ahrim's. Ahrim the Blighted is the oldest of the Barrows brothers. Barrows, If you didn't know, is a mini game. He uses low level magic spells as well as his special effect "Blighted aura", which lowers a player's strength level temporarily. Also, like every one of the Barrows brothers, his armour is tinted red and is ghostly, because, well, they're dead.

Generally, Ahrim is considered the weakest because he wears robes, as all mages do, as opposed to his younger brothers, who wear actual armour, therefore making it easier for players to land blows on him. He is weak against ranged attacks.

He is a mage. If you kill him, you can get some of his equipment. I may be kind of a high level (combat level 89), but I can't kill him. So, I'm buying the set from players who already have gotten it and are selling it. The circled objects are Ahrim's armour pieces I already have: this staff, hood, and robe top. Combined, they cost less than the robe bottom for some strange reason.

I am trying to raise money to afford the 4.7 million gp robe bottoms. I am close... ok, not really. I still need about 3.6 mil and I need to level up my main combat stats (attack, defence, and strength, along with magic) to 70. I am chopping both Magic and Yew trees. I sell Magic logs and make short bows out of Yew logs and sell those.

BTW I forgot to put my character's picture on the first post, so check back there if you can't figure out what I'm talking about.